Linear relationship: a relationship between two interval/ratio variables is said to be linear if the observations, when displayed in a scatterplot, can be approximated by a straight line. In other words, if we were to play connect-the-dots, the result would be a straight line.
Ordinary least squares (OLS) regression: a technique in which a straight line is used to estimate the relationship between two interval/ratio variables. The line that minimizes the sum of the squared errors (the distance between the line and each observation) is said to be the "best-fitting line."
Y-intercept (a): the point at which the regression line crosses the y-axis. Alternatively, the y-intercept can be thought of as the value of y when x is zero.
Slope (b): the amount of change in y (the dependent variable) for each unit-change in x (the independent variable), or rise/run, for those of you who actually remember 8th grade algebra.

We can use bivariate regression to look at the relationship between any two variables, but for the purposes of this course we will focus on interval/ratio variables. Bivariate regression tells us the amount of change in the dependent variable for each unit change in the independent variable. In other words, we can tell exactly how much someone's income goes up for each year of school he or she has completed. At this point, we're no longer talking about relationships in terms of "strong" and "weak" like we did with nominal and ordinal measures of association (if your instructor skipped nominal and ordinal measures of association, just smile and nod). We can now calculate the exact relationship between the two variables.

The first step in calculating bivariate regression is to make a scatterplot, like so: 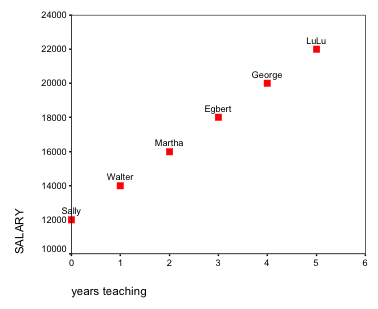 Here we have a very basic scatterplot detailing the relationship between one's years of experience as a teacher and one's salary. The independent variable (years teaching) always goes along the bottom, or x-axis.

Notice that Sally, who just started teaching, has a salary of $12,000. This starting point is also known as the y-intercept. It is referred to the y-intercept because it is the point at which the regression line crosses the y-axis.

A scatterplot is useful for three reasons:

Now suppose we wanted to predict the salary of someone with six years of teaching experience. We can predict any score on the dependent variable with the following equation:

x = the actual score on the dependent variable

a = the y-intercept, or the point where the line crosses the y-axis; therefore a is the value of y when x is 0

b = the slope of the regression line, or the change in y with each unit change in x. In our example, a = 12,000 and b = 2,000. A teacher will make $12,000 with zero years of experience, but his or her salary will go up by $2,000 with each year of experience. For a more detailed explanation of how to find b, see either your textbook or the examples posted on Canvas.

Because perfectly linear relationships are extremely rare in the real world, any actual scatterplots you put together will probably look something like this: 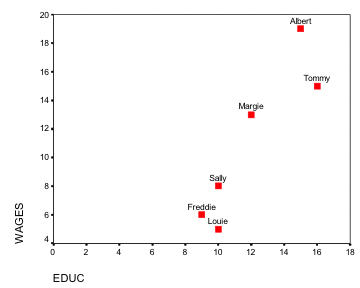 We can see that this relationship is linear, but how do we draw a line that will accurately depict the relationship between education and income? Few if any of our values are likely to fall directly on the line, and some may fall a great distance from it. Generally speaking, the best-fitting line is the one that generates the least amount of error, or the one that minimizes the distance between the line and our observations.

Not all best fitting lines are created equal; some might not be representative of our data at all. We need a statistic that can tell us, among other things, how well our line fits our data. The coefficient of determination, or r2, does just that. The formula for calculating r2 is as follows:

Or, put a bit more simply, we square the covariance—a measure of the degree to which two variables are linearly associated with one another—and divide it by the product of the variance of each of our variables.

In the example from the previous set of notes, which can be found in the "Files" section on Canvas, the covariance is 46.8, and the variance of x and y are 6.5 and 355.5, respectively. Thus, to find r2 we need only plug our values into the formula:

A couple of important things about r2:

Another commonly used measure of association between interval/ratio variables is r, also known as Pearson's Correlation Coefficient. To find r, we just take the square root of r2, like so:

A few things to remember about r:

Taking the square root of r2 is easier, don't you think?

The results of your regression equation should appear in the output window. SPSS displays the results in a series of several tables, but we're only interested in two of them: the "Model Summary" table and the "Coefficients" table. The model summary table displays the r and r2 values, both of which are indicative of how well your line fits your data. The coefficients table is where you will find your slope and y-intercept. For a more detailed breakdown of this regression output, see the accompanying video: