The Chi-Square Test for Independence

The primary use of the chi-square test is to examine whether two variables are independent or not. What does it mean to be independent, in this sense? It means that the two factors are not related. Typically in social science research, we're interested in finding factors that are dependent upon each other—education and income, occupation and prestige, age and voting behavior. By ruling out independence of the two variables, the chi-square can be used to assess whether two variables are, in fact, dependent or not. More generally, we say that one variable is "not correlated with" or "independent of" the other if an increase in one variable is not associated with an increase in the another. If two variables are correlated, their values tend to move together, either in the same or in the opposite direction. Chi-square examines a special kind of correlation: that between two nominal variables. 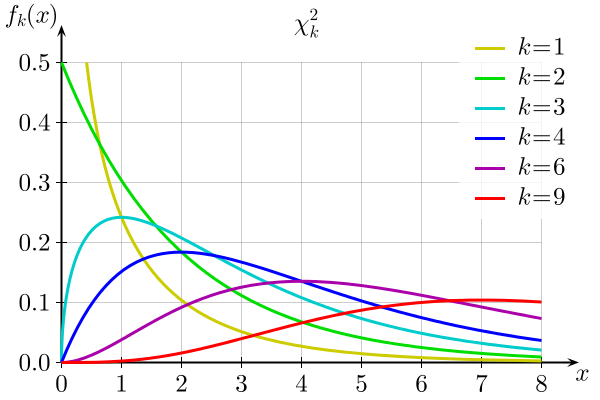 Earlier in the semester, you familiarized yourself with the five steps of hypothesis testing: (1) making assumptions (2) stating the null and research hypotheses and choosing an alpha level (3) selecting a sampling distribution and determining the test statistic that corresponds with the chosen alpha level (4) calculating the test statistic and (5) interpreting the results. Like the t tests we discussed previously, the chi-square test begins with a handful of assumptions, a pair of hypotheses, a sampling distribution and an alpha level and ends with a conclusion obtained via comparison of an obtained statistic with a critical statistic. The assumptions associated with the chi-square test are fairly straightforward: the data at hand must have been randomly selected (to minimize potential biases) and the variables in question must be nominal or ordinal (there are other methods to test the statistical independence of interval/ratio variables; these methods will be discussed in subsequent chapters). Regarding the hypotheses to be tested, all chi-square tests have the same general null and research hypotheses. The null hypothesis states that there is no relationship between the two variables, while the research hypothesis states that there is a relationship between the two variables. The test statistic follows a chi-square distribution, and the conclusion depends on whether or not our obtained statistic is greater that the critical statistic at our chosen alpha level.

In the following example, we'll use a chi-square test to determine whether there is a relationship between gender and getting in trouble at school (both nominal variables). Below is the table documenting the raw scores of boys and girls and their respective behavior issues (or lack thereof):

Gender and Getting in Trouble at School

As is customary in the social sciences, we'll set our alpha level at 0.05

We do the same thing for the other three cells and end up with the following expected counts (in parentheses next to each raw score):

Gender and Getting in Trouble at School

With these sets of figures, we calculate the chi-square statistic as follows:

After we've crunched all those numbers, we end up with an obtained statistic of 1.87. (Please note: a chi-square statistic can't be negative because nominal variables don't have directionality. If your obtained statistic turns out to be negative, you might want to check your math.) But before we can come to a conclusion, we need to find our critical statistic, which entails finding our degrees of freedom. In this case, the number of degrees of freedom is equal to the number of columns in the table minus one multiplied by the number of rows in the table minus one, or (r-1)(c-1). In our case, we have (2-1)(2-1), or one degree of freedom.

The Limitations of the Chi-Square Test

Carrying out the Chi-Square Test in SPSS

To perform a chi square test with SPSS, click "Analyze," then "Descriptive Statistics," and then "Crosstabs." As was the case in the last chapter, the independent variable should be placed in the "Columns" box, and the dependent variable should be placed in the "Rows" box. Now click on "Statistics" and check the box next to "Chi-Square." This test will provide evidence either in favor of or against the statistical independence of two variables, but it won't give you any information about the strength or direction of the relationship.